The M-TRAY is a ready-grown, fully established sedum, sedum-and-wildflower or wildflower-only green roof loaded into a portable tray, for easier installation of green roofs.

All the growing, filtration and drainage elements are included in the system and the shape of the modules means that each one is simply laid onto the deck and clipped to 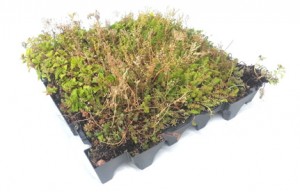 the next module to create one seamless, fully established green roof.

The M-TRAY modules are pre-grown in Wallbarn’s UK nursery. The empty modules are made from polypropylene and are manufactured with an angled base which creates a large surface area for the roots to establish. The module is lined with a geotextile filter fabric and then filled with the aggregate substrate mix. The exact makeup of the mix depends on what type of plants the growers are propagating in that particular batch.

The major benefit of M-TRAY is flexibility. Getting to the roof is not a disruptive and costly process, which is a huge advantage over loose lay systems. It is simply not possible to loose-lay roll-out systems layer-by-layer on some roof areas due to access restrictions. , M-TRAY can reach the roofs other systems cannot reach.

Access to the roof is future-proofed. If there are problems with the deck beneath or inspection is required, one M-TRAY or section can easily be lifted out without any disruption to the whole deck. With loose lay systems, the whole area may need to be destroyed when accessing the deck.

A major advantage to the M-TRAY system is the “clip on” nature of installation. The fuss, time and skill required to install drainage layers one-by-one, to the correct level and in the correct order is removed as it comes in a complete kit.

We were recently approached by BetweenBricks, an architectural collective based in London who were working on a series of projects as part of the OPEN HOUSE scheme.

What Is Open House?

OPEN HOUSE is a series of events where buildings and sections of London not previously available to the general public are opened up to allow visitors. They were 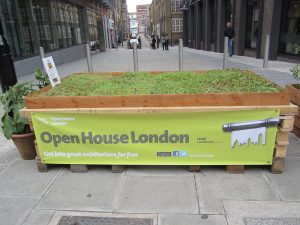 organising a guided tour of the secret green spaces in London had an idea to try to green up bus stops and other traffic hubs, to create better environments. They needed an easy to install and easy to take away solution as the OPEN HOUSE event was taking place only across a weekend.

We immediately knew that our M-Tray modular green roof system was ideal and offered to donate the plants and fittings.

We offered guidance and advice on how to install the modules on a cantilever metal roofed bus stop and delivered them overnight to the “Silicone Roundabout” area of Old Street in the east of the City.

BetweenBricks constructed a sedum green roof on the bus stop and introduced other plants in the vicinity to create a natural space in which passengers could enjoy the experience of waiting for a bus.

They included the idea and technical aspects of the “green bus stop” into the walking guided tour they were organising as part of OPEN HOUSE and the response was extremely positive.

BetweenBricks were keen to stress the ease of installation with the minimum of disruption and explained to the people who joined the tour that they are making representations to Tfl regarding installing these types of green roofs on many more bus shelters across London.

The response was overwhelming, according to BetweenBricks. The public were extremely interested in the concept of an easy way to create attractive habitats on lost space in the city. A lot of passers-by stopped to take photos and ask questions about the concept of the “instant greening” and supported the idea of it being extended throughout London.

“The event went really well………….. There were over 1,000 people who looked [at] the installation as they passed, around 300 people stopped to have a closer look and another 100 people stopped to ask questions or talk to us about it. ………..There was overwhelming support and interest with our idea from people that stopped to talk to us. ……..

Between Bricks are very keen to take this idea forward and speak to tfl, the local council and other interest groups about installing green roofs on existing bus stops. ……

The sedum roof was a huge part in the success of the installation and we wouldn’t have been able to put it on without it. Thank you so much”

Wallbarn remains committed to supporting this concept as we feel that instant sedum roofs and coverings as we feel it not only makes ugly and lost spaces attractive and a haven for wildlife; it can protect those decks from exposure to the elements, reduce pollution and offer localised cooling benefits to the environment.

The changing weather and the disastrous effects that it has had on the UK’s flood defences has opened up a gap for an innovative engineering company to provide a solution which can offer lasting relief from the potential damage that can be caused by water.

We are very hopeful that we will be able to play a pivotal role in this project (check back with us soon for further information…..).

How Can We Help?

Wallbarn’s range of geoxtextile fabrics available from Wallbarn can be supplied in a variety of different materials and densities ensuring that they are absolutely ideal for many different uses including protection, filtration and highly effective drainage.

Because these non woven fabrics are permeable membranes, they allow water to pass through but hold the particles in place. This means that the soil will not become saturated, thereby improving the strength and stability of the ground and offering a highly effective solution designed to combat the increased threat posed by significant rain fall.

Geotextiles are extremely useful to help improve the condition of groundworks before starting construction. They are used extensively in road and rail construction and beneath concrete foundations and blinding layers. The make-up of the fabric is uniform throughout the roll, so no weak spots will be present in the layer.

Geotextiles also provide a very viable, flexible, permeable protection and cushioning layer on areas such as reservoirs and landfills. A preliminary layer can be installed to prevent soil movement and stones from piercing delicate membranes above.

They are extremely effective as subterranean soil stabilisation membranes. Either covering buried pipes or lining drains, they will ensure the passage of water without risk of land slippage, greatly improving the quality of the area.

They can also be used on areas where new built-up ground is being created, such as artificial islands and reclaimed land, to prevent subsidence before the soil is fully consolidated.

These are exciting times in the engineering world!

In the ever changing landscape of London, the excitement is building concerning a new development in the South London area called – Riverlight.

Riverlight is an exciting new residential development, directly on the riverfront in the heart of the new Nine Elms on the South Bank district, London’s largest and most exciting regeneration area.

Check out the video below for further information

A development comprising of six pavilions, rising in height, all with a North-South orientation, Riverlight contains 806 apartments ranging from suites to three-bedroom penthouses. In addition to such a wide range of accommodation, the development has a vibrant mix of leisure and retail facilities at street level.

This is a stunning development in an area soon set to redefine the geography of London. The area has a new American Embassy (surely leading to a new international hub within close proximity of Westminster), the proposed extension of the Northern Line via a new Battersea Tube Station and the creation of Linear Park – a new green landscaped park spanning from Vauxhall to Battersea Power Station. This is a stunning development in a fantastic location, less than a mile from the Houses of Parliament and just a short hop across the river to Chelsea.

The first occupants will start residing from mid-2014 and residents will benefit from a 24hr concierge service, a health club featuring a holistic spa and offering treatments, a state-of-the-art gym and a spectacular swimming pool. Riverlight will also benefit from a bars and restaurants, an art gallery, a food store, crèche and secure car parking.

Our Role in the Project

We are very proud to have been working on St George Wharf for many years, and this project was the start of the regeneration of the area. The whole of this area is being developed with a series of major skyscrapers being planned or actually constructed now.

We are currently supplying support pads for paving and decking, chiefly for the balconies and terraces on the private blocks, but we would like to extend our presence on the new developments with some of our ground products, such as the geotextiles for landscaping and soil stabilisation (it is an area with a high water table, being on old swamp land); Protecto-board for waterproofing membranes, temporary protection during the construction process, basement construction and tanking; Protecto-drain for tanking, basements and subterranean drainage; and green roof products and services, as there are a lot of roof gardens, ground landscaping and green roofs being planned.

For more information or to place an order

Give us a call

Drop us a line